Garlic is one of the most valuable foods on the planet. For centuries it has been used for its effect on creating and 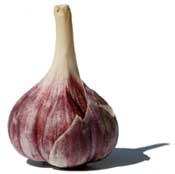 For centuries garlic has been revered for numerous health benefits which include: maintaining a strong immune system, fighting infections, antioxidant activity, reducing cholesterol buildup in arteries, regulating blood pressure, maintaining a healthy heart and preventing arteriosclerosis, or hardening of the arteries.

Deodorized garlic, is one of the ingredients in Arches Tinnitus Formula™, and was included primarily for its ability to thin the blood, thereby improving circulation, and to reduce plaque buildup in the small artery that leads to the cochlea. Plaque buildup will severely inhibit blood flow and reduce the health of the cochlea.  A new study published in 2012 offers yet another reason why garlic is so important to those of us with tinnitus.

Researchers from Turkey were looking for ways to reduce the ototoxicity of gentamicin, a powerful aminoglycoside antibiotic. Gentamicin is a potent broad-spectrum antibiotic. Because of its affordability, efficacy and rarity of allergic reactions it is one of the most commonly used antibiotic worldwide.

However gentamicin comes with a number of undesirable and somewhat frequent side effects including cochlear, vestibular and renal impairments. Gentamicin is toxic to the cells of the inner ear, probably through the action of reactive oxygen species, or free radicals. This is supported by the fact that ototoxicity is reduced when it gentamicin usage is combined with free radical scavengers or antioxidants.

Incidences of toxicity from gentamicin range from 6% to 16% for cochlear ototoxicity, 9% to 15% for vestibular toxicity, and from 15% to 30% for renal toxicity.

The researchers decided to test the ability of garlic to reduce oxidative stress on laboratory rats that had ototoxic reactions to gentamicin.[1]

Auditory thresholds were determined for each rat both before and after 21 days using brain stem evoked response audiometry. This is a procedure where the rat is tranquilized and an auditory signal is introduced to the ear. Electrodes on the scalp record microvolt variations in electrical potential, which reflect brain response to the auditory signal.

The authors concluded that a garlic-supplemented diet seems to hold promise in preventing or ameliorating aminoglycoside antibiotic-induced hearing loss.

Someone facing an infection that needs to be treated with antibiotics would be wise to supplement with garlic. Garlic, itself, exhibits antibiotic properties and will also prevent ototoxic reactions to the medication.